Tourism on Vis began to develop significantly at the beginning of the 1990’s in Croatia. So, it has been only been a little more than ten years ago that both the island and its town opened for the visit of tourists. The remains of the military objects in the northwest and northeast part of the Bay of Vis are the witnesses of the stay of the Yugoslav Army. Vis was at one point the site of the general headquarters of Marshal Josip Broz Tito, the leader of the Yugoslav Partisan resistance movement. It was liberated by the Partisans under the command of Tito, and by a British flotilla, in 1941 and 1943. At the end of World War II the island returned to Yugoslavia. 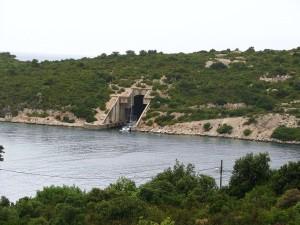 There are only about 2000 people living in the town of Vis, and around 3500 on the whole island. Many visitors, and especially the yachtsmen, are coming more and more to Vis. In every moment you can see changes in life-style, but at the same time Vis has kept the old, irresistible Mediterranean charm and life without stress and trouble.

Stiniva cove on the island of Vis

The fortresses and the stony piles testify to the thousand-year-old settlement on Vis, and the remains of a theatre built into the foundations of the Franciscan monastery on the peninsula Prirovo, antique therms or the Hellenistic cemetery, confirm that Vis is one of the oldest urban centres in Croatia. The wine-growing has been the most important activity of the local inhabitants since the antique times, and so the writer Agatarhid told us “how the vine from Issa, an island in the Adriatic sea in comparison with others better”. On the other side the rich fishing grounds in this part of the Adriatic. The island’s two largest settlements are the town of Vis on the eastern side of the island (the settlement after which the island was originally named), and Komiža, on its western coast.

Where to stay: Dubrovnik Region Hotels