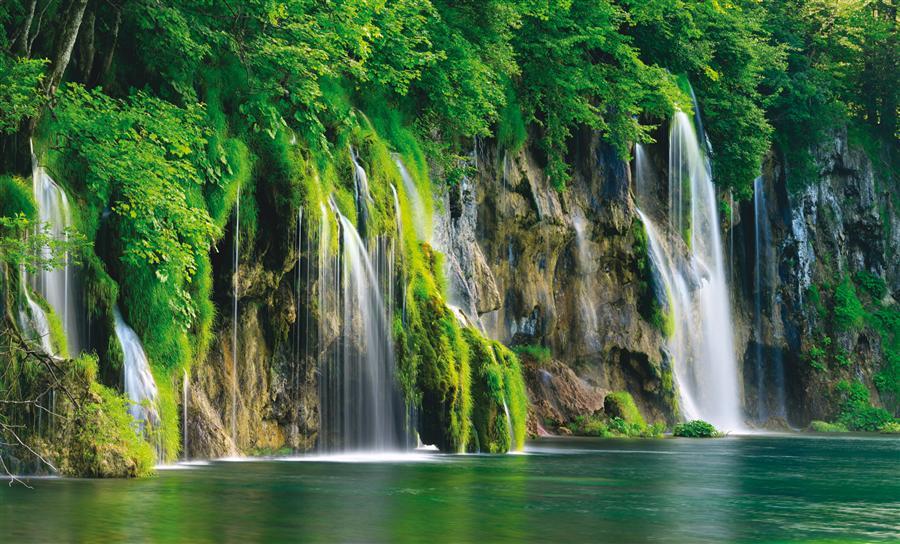 Plitvice Lakes National Park contains a series of beautiful lakes, caves and waterfalls. These have been formed by processes typical of karst landscapes such as the deposition of travertine barriers, creating natural dams. These geological processes continue today.

The Plitvice Lakes basin is a geomorphologic formation of biological origin, a karst river basin of limestone and dolomite, with approximately 20 lakes, created by the deposition of calcium carbonate precipitated in water through the agency of moss, algae and aquatic bacteria. These create strange, characteristic shapes and contain travertine-roofed and vaulted caves. The carbonates date from the Upper Trias, Juras and Cretaceous Ages and are up to 4,000 m thick. In order to maintain and preserve the natural characteristics of the lakes, the whole of surface and most of the subterranean drainage system has to be embraced by extending the original borders of the park. The new areas comprise layers of karstified limestone with dolomites of Jurassic age.

There are 16 interlinked lakes between Mala Kapela Mountain and Pljesevica Mountain. The lake system is divided into the upper and lower lakes: the upper lakes lie in a dolomite valley and are surrounded by thick forests and interlinked by numerous waterfalls; the lower lakes, smaller and shallower, lie on the limestone bedrock and are surrounded only by sparse underbrush. The upper lakes are separated by dolomite barriers, which grow with the formation of travertine, forming thus travertine barriers. Travertine is mostly formed on the spots where water falls from an elevation, by the incrustation of algae and moss with calcium carbonate. The lower lakes were formed by crumbling and caving-in of the vaults above subterranean cavities through which water of the upper lakes disappeared.

The forest, that comprises pure stands of beech at lower altitudes and mixed stands of beech and fir at higher levels, can also be classified in terms of underlying strata of dolomite and limestone complexes. The dolomite communities comprise tertiary pine, hornbeam, spruce and beech-fir forests. The limestone communities have a smaller number of forest types but cover a larger area with communities of spruce and fern, spruce in beech, coppiced hornbeam with sumac, maple and heather. Hydrophytic communities of black alder, grey ivy, willow, reeds and bulrush communities are found. There are a large mosaic of meadow communities, depending on altitude, geology soils and other ecological factors.

The area is fauna-rich, including European brown bear, wolf, eagle owl and capercaillie. There are records of 126 species of bird, of which 70 breed.

The area was the cradle of the prehistoric Illyrian tribe of Japuds dating from 1000 BC. The Japudic culture was followed by the Romans and from the 8th century AD was occupied by Slavs. Archaeological remains include a prehistoric settlement on the site of the current Plitvice village, fortifications, Bronze Age tools and ceramics.