Zadar City Land Gate at the Port of Foša
Tweet

Most of us have heard about Dubrovnik’s  charms, but Zadar in the western corner of Croatia has pretty beaches, sunshine and medieval history on its doorstep.

Even better, there are fewer tourists. It’s a two-hour flight from the UK, and travel in June — when we are here — and you’ll avoid the Germans and Austrians who have been parking themselves on the sunbeds for years.

We are spending a week based in the lively city and on the island of Pag, from which the crumbly local sheep’s cheese takes its name. Zadar, home to around 70,000 people, is a joy to explore, with pedestrianised streets that seem made for strolling. Two thirds of the city was destroyed in World War II and the more recent War of Independence, but careful restoration sits  happily alongside impressive  modern architecture.

We are particularly taken with the sea organ — a series of undersea pipes along the promenade, which turn the waves into music.

The glorious sunsets make late afternoon a good time to walk here — especially if you drop in at Donat, the gelateria opposite the cathedral, on your way. It’s a local favourite and the kiwi and blueberry flavours are delicious. Food wasn’t always Croatia’s big draw, with sausage or stodge traditionally on the menu. But no longer — and certainly not here.

In eastern Croatia you might still have to settle for goulash, thanks to the Hungarian influence, but Zadar was governed by the Venetians, who left, among other things, the legacy of pizza. Tiny Tri Bunara cafe serves cheap, tasty pizzas and beer for two, for less than £10. The seaside Fosa restaurant, by the old city walls, specialises in exquisitely grilled fish and the speciality, truffle tagliatelle.

Croatian wines are on the up —and they take olive oil seriously here, with most restaurants producing their own. 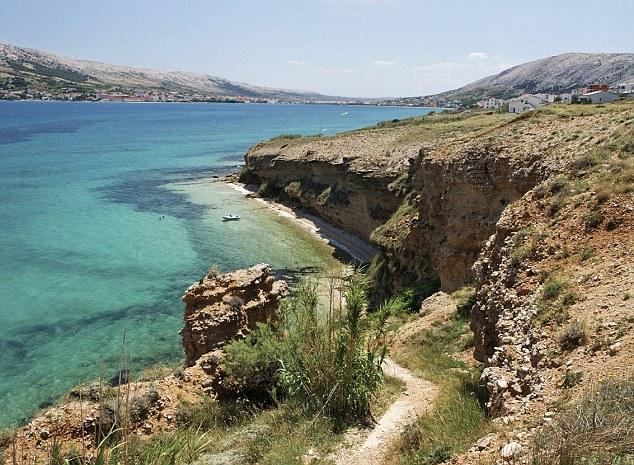 Pag Island has become known as a Croatian Ibiza

We are staying in Iadera, a spacious, modern resort, a  15-minute drive from the city. It looks like a spaceship from the outside and a cruise ship on the inside, but comes with its own pebbly beach with hidden hammocks.

The Austrian owners’ influence can be seen in the enormous black-and-white spa with several pools, some of which go from indoors to outdoors.The harem of saunas and steam rooms have strict warnings: ‘FOR HYGIENE REASONS, NO SWIMWEAR ALLOWED IN SAUNA’. Being British, we ignore these  signs and keep our swimwear firmly on.

Iadera is an ideal base for day trips. An hour’s drive, then a catamaran trip takes us to Rab, a rocky island with an old town untouched by any of Croatia’s wars and full of history. 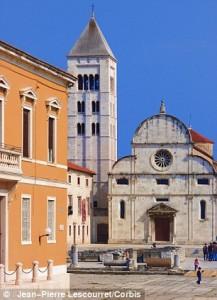 Edward VIII and Wallis Simpson apparently skinny-dipped off the island and there are plenty of naturist beaches if you fancy doing the same.

In late July there’s a medieval festival, which includes a tournament re-enactment  and a parade by the island’s proud crossbowers. Active visitors will enjoy Rab’s 93 miles of cycle paths, which skirt hidden bays offering cooling-off dips. The lazier can take a water taxi to a bay or swim: August sea temperatures hit about 28c and it’s pleasant but cooler in spring — around 21c. 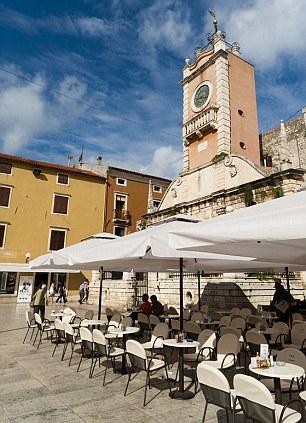 The island is home to some of Croatia’s few sandy beaches and there are a sprinkling of big hotels, but the small Villa Hotel Barbat, where we stay, has simple rooms and delicious food.

Roman Abramovich dined here in  summer after anchoring his yacht nearby. We eat like oligarchs on a lunch of tuna steak and monkfish, that truffle tagliatelli and vanilla ice cream with pumpkin seeds, plus olive oil. Cheap beds can be found in thousands of homes in Rab and around Croatia: look for the sobe sign, which indicates bedrooms.

A ferry ride and half-hour drive takes us to the island of Pag. The landscape is far from green, which locals tell us is down to the Bora, a powerful, cold and salty wind. But at  the peak of summer it’s hot, and Pag’s beaches are a mini-Ibiza. If that’s not your scene, there is a quieter pace to be found in the old town. The salt museum, in a former salt warehouse, is worth a look, especially if you take a tour.

Moving around Croatia is easy: the roads are decent and signage is plentiful. The two-hour journey to Plitvice Lakes National Park is an event in itself, with 17 interconnected bluey-green lakes and miles of wooden paths  with trails.

Check the forecast before heading off: it’s much cooler  on Plitvice’s side of  the mountains.
We end our trip with a stay in Zadar’s old town, at the boutique Hotel Bastion. The ruins of a 13th-century castle have been impressively integrated into the building — but the best thing is it’s near the seafront and Zadar’s lively restaurant scene.

Look out Dubrovnik, this lovely spot is hot on your heels.