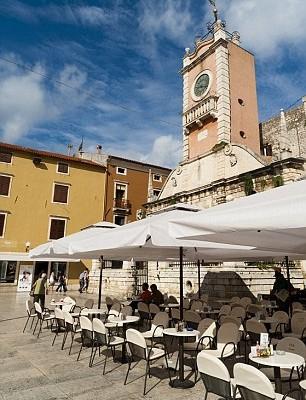 The southern stretch of Croatia’s Dalmatian coast is saturated with sunseekers at this time of year. But head north and you will find a region rich in history and natural beauty, which is still relatively undiscovered.

Here you can wander quiet streets of marble, sprawl undisturbed on pine-scented beaches and sail to remote islands, deserted except for tiny konobas – restaurants catering mostly to fishermen. Not only is there a dramatic coastline but northern Dalmatia also has a broad hinterland. Three national parks are crammed between the crystal-clear coast and the dusky Velebit mountains, offering hiking, swimming and rock-climbing.

The walled port of Zadar makes a convivial base for exploring the region. In the old town, Roman ruins stand alongside Romanesque churches and art installations. There are also good fish restaurants, student-filled cafés and a flourishing bar scene, with prices comparing favourably with those farther down the coast.

An internationally flavoured season of festivals by the sea is attracting a younger crowd, and Zadar’s historic centre is less than 30 minutes’ drive from the airport – handy, when there is so much to do and see.

The only hotel in Zadar’s old town – the boutique, four-star Hotel Bastion (00385 23 494 950, www.hotel-bastion.hr/en), which was built into the battlements of a 13th-century Venetian fortress, complete with canons. Its location can’t be beaten, and it’s convenient for island ferries; doubles from £180 in high season.

Walking around Zadar’s historic centre. If there is a breeze, start at thesea organ, an art installation consisting of a series of pipes cut into the promenade. Soft, meditative chords become a slightly alarming cacophony of groans when the waves are choppy. The same artist also created the Monument to the Sun, a large disc of solar-powered cells that becomes a multicoloured disco ball as the sun sets.

More classical sights include the Roman forum, of which only a few columns and an altar remain. Stones from here were used to build the neighbouring rotunda of 9th-century St Donat’s Church and are clearly visible.

Zadar’s 12th-century cathedral has three beautiful portals that would not look out of place in Tuscany, and a bell-tower to climb. Close to an impressive city gate, the church of St Simeon contains a beautifully crafted silver reliquary. More can be seen in the excellent Gold and Silver of Zadar exhibition at St Mary’s church.

For a memorable experience, take a short trip with the gnarled boatmen who have been rowing residents across the harbour for more than 800 years. The women at the town market look like they may have been selling their salty, speciality Pag cheese for almost as long.

Swimming and walking in Krka National Park, just over an hour’s drive away. Visitors enter by taking a short cruise up the emerald Krka river, through a pine-cloaked limestone gorge, to Skradinski Buk. A gorgeous swimming area is roped off at a bend in the river below the crescent of waterfalls. Before stripping off, take the shaded one-mile walk past a chain of tumbling pools to spot fish and sapphire dragonflies.

At one of Zadar’s unpretentious fish restaurants. Hotel Niko (as before) has a smart, family-run place with a good range of shellfish and fresh fish cooked traditionally. In the old town, with harbour views, Kornat(Liburnska Obala 6, 00385 023 254 501) has a wider menu that includes handmade pasta in lamb sauce and beef tagliata. Fosa (Kralja Dmitra Zvonimira 2, 00385 23 31 44 21, www.fosa.hr) offers the most modern cooking, a wide choice of raw fish carpaccio and a romantic setting at the end of a small harbour. Expect to pay about £25 a head, including wine.

Stay out late at…

One of the beachside festivals popular with younger Britons, held in the fishing village of Petrcane, just outside Zadar. The site includes a Seventies-style club and a dance floor lapped by waves that is perfect for sunsets. The annual Garden Festival (www.thegardenfestival.eu)sets a euphoric tone for the season, which ends with the Stop Making Sense Festival on September 3.

In Zadar’s old town, start or finish your evening at The Garden(Liburnska Obala 6, www.thegardenzadar.com), an open-air bar owned by a British music producer, with funky lighting, chilled beats, cabanas and harbour views.

Spend the next day…

On a boat. Take an early morning ferry from the harbour to either the north or south of Dugi Otok, a rugged island just over an hour’s journey away. Drive north to Sakarun, one of the region’s best beaches, a shallow, turquoise bay with a white-sand bottom, fringed by pine trees. Or sail south to Sali, the largest town on the island.

The tourist office in Sali has information on boat trips to the Kornati National Park – a scattering of small islands, dusted with scrubby grass and ringed by necklaces of scree. Trips include a cruise along the starkly beautiful cliffs at Telascica bay, a swim in a sandy cove and lunch at a remote konoba. Alternatively, visit Paklenica National Park and hike among karstic peaks, caves and gorges.