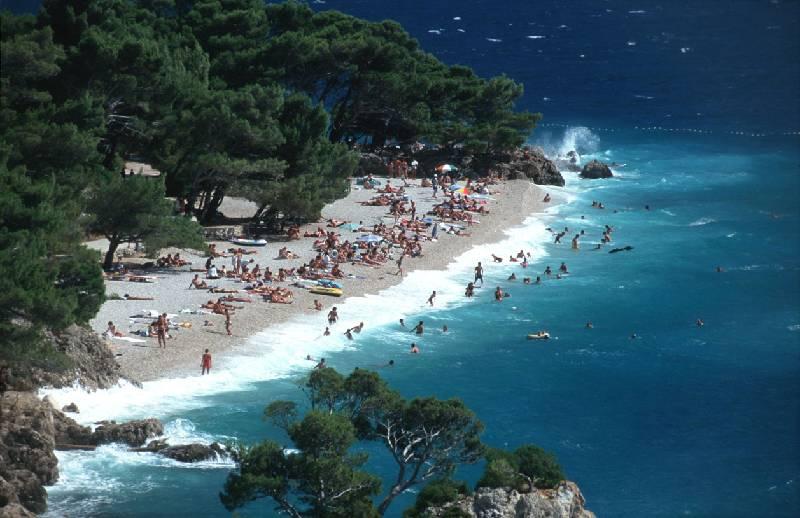 Brela Beach is on Croatia’s mainland, only a few kilometers from Split and Makarska on the other side and one of Croatia’s most popular and highest rated beaches. It’s an easy day trip to Brela from either city and you’ll find that many people make the drive down the coast to enjoy the fine pebbles that look like sand from a distance. One of the best features of Brela is the series of secluded coves that add a bit of privacy to your visit. Each cove becomes your own little swimming hole and you may find yourself growing attached to one in particular if you go to Brela’s shores multiple times. Brela is consistently ranked at the top of the best beaches in Europe and the attention has attracted many hotels to the area.

Hotel Marina and Hotel Soline are your best bets for three star hotels, but a number of apartments and rooms for rent can also be found easily in the surrounding area for significantly less than the hotels, in most cases. There are almost limitless recreation options around Brela. Brela is one of those destination beaches where the facilities come to you and you’re more likely to have to fight the guy offering to take you parasailing off with a stick than you are of getting bored while you’re there. Parasailing, scuba diving, gondolas, table tennis, even bowling is available near the beach. Because it’s just south of Split, Brela’s weather is predictable and fairly similar to Croatia’s overall weather patterns. The weather will be sunny and hot in the summer, cooler and rainy in the winter. Although the crowds increase in the summer, the beach at Brela is seemingly never “full.” There is no such thing as a bad time to visit Brela.

Like almost all beaches in Croatia, topless sunbathing is acceptable by both women and men. Full nudity is officially discouraged, but with the coves at Brela offering something of a shield between the sections of beach, there will most likely be few complaints. Beaches generally separate themselves somewhat by age in Croatia, so that there is a family section and a place for adults. Mostly though, everyone at the beach is there to have a good time and enjoy the sun.