Please find the following links helpful in your arrangements:

Ministry of Tourism Republic of Croatia

Republic of Croatia Ministry of the Interior

Croatia occupies the largest part of the eastern coast of the Adriatic Sea which, as a part of the Mediterranean Sea, penetrates deepest into European soil. Croatia’s shoreline and numerous islands enjoy the majority of the Adriatic coastline. The narrow Dinara Mountain Range separates the country’s Mediterranean region from its central European continental part, which spans from the easterly edges of the Alps in the North-West to the shores of the Danube in the East, encompassing the southern part of the fertile Pannonian lowlands.

Climate: There are 3 climate zones in Croatia: in the country’s continental interior the prevailing climate zone is moderately continental , while the mountain climate prevails at 1200m above the sea level. The area along the southern Adriatic coast is known as ‘Dalmatia‘ and has a pleasantly mild Mediterranean climate with a large number of sunny days, summers are hot and dry and winters are mild and wet. The average temperatures in the continental interior are: January -2 oC to 0 oC, with somewhat lower temperatures in the mountains; July temperatures reach 20 oC-22˚C, and around 13˚C in the highlands. The average temperatures in the Littoral (Adriatic Coast) are: January 5˚C – 9 oC and July 23°C – 26°C. Winter sea temperature is about 12 oC and it reaches approximately 25 oC in the summer. 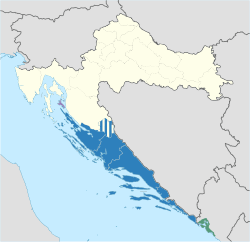 The official currency in Croatia is the kuna (1 kuna = 100 lipa). Foreign currency can be exchanged in banks, exchange offices, post offices and in the majority of tourist information offices, hotels and campsites. Credit cards (Eurocard / Mastercard, Visa, American Express and Diners) are accepted in almost all hotels, marinas, restaurants, shops and cash machines.

A valid passport or some other identification document recognised by international agreement; for certain countries a personal identity card is sufficient (a document which testifies to the identity and citizenship of the bearer). Information: Diplomatic missions and consular offices of the Republic of Croatia abroad or the Ministry of Foreign Affairs and European Integration of the Republic of Croatia.

Customs regulations when you travel to the Republic of Croatia are almost entirely harmonised with EU regulations and standards, but the value of those non-commercial items that are brought into the country for personal use and are exempt from tax duty or PDV (VAT), is limited to only 1,000 HRK (kuna). Foreign and local currency and cheques may be freely taken in and out of the country by both foreign and Croatian citizens with foreign residence, but transfers of an amount of 10,000 Euros or more must be declared to a customs official. Valuable professional equipment and other technical devices must also be declared to a customs official at the border crossing. VAT is refunded to persons who do not have permanent or temporary residence in Croatia, for individual goods purchased in Croatia, for amounts in excess of 740.00 HRK (Kuna), upon the presentation of a Tax Cheque form verified by a customs official during the export of purchased goods, at the latest 3 months from the day of purchase. Foreign nationals must claim Tax refunds within six months of the receipt issue date.

Demographics: The majority of the population are Croats, with the largest minorities being Serbs, Bosnians, Slovenes, Hungarians, Czechs, Italians and Albanians.

System of government: Croatia is a multi-party parliamentary republic.

Capital: With 792 875 inhabitants, Zagreb is the economic, transport, cultural and academic centre of the country.

Length of the coastline: 6 278 km, of which 4 398 km is made up of island coastlines, solitary rocks and reefs.

Number of islands, islets, solitary rocks and reefs: 1,244. The largest islands are Krk and Cres. There are 50 inhabited islands.

https://www.britannica.com/place/Croatia On Croatian wine: “I want to bathe in this. I would like to frolic in this wine. Where’s my toga?” ~ Anthony [...]