Croatian Čupavci (CHOO- pahv-tsee) are deadringers for Australian lamingtons. Čupavci are small sponge cakes filled with custard, dipped in chocolate and covered with coconut. It consists of squares of sponge cake coated first in a layer of traditionally chocolate sauce, then in desiccated coconut. 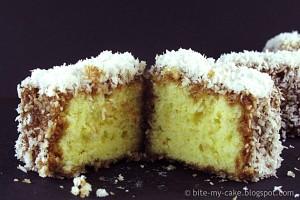 Cupavci, a sponge cake coated in a layer of chocolate sauce, then covered in coconut flakes, is also known as a Lamington.

The Croatian name comes from čupavi, which means “furry,” from the look of the coconut. Some Croatian recipes call for honey in the sponge and rum or other liquor in the chocolate, and some cover the entire sponge cake with chocolate and coconut while others just cover the top.

The chocolate coating is a thin mixture, into which cubes of sponge cake are dipped, and the chocolate is absorbed into the outermost layers of the sponge where it sets.

Cupavci is also known as a Lamington

Most accounts of the creation of the lamington agree that it was named after Lord Lamington, who served as Governor of Queensland from 1896 to 1901, although it might have been named for his wife, Lady Lamington. One account claims the dessert resembled the homburg hats that he favored. Another claim has them named after the village of Lamington, South Lanarkshire in Scotland. As the title Baron Lamington itself derives from the village, however, the question of this connection is merely whether it is direct or indirect.

In another historical account, Lamington’s chef at Queensland’s Government House, French-born Armand Galland, was called upon at short notice to provide something to feed unexpected guests during the busy period leading up to Federation in 1901. Galland cut up some left-over French vanilla sponge cake baked the day before, dipped the slices in chocolate and set them in coconut. Coconut was not widely used in European cooking at that time, but was known to Galland whose wife was from Tahiti where coconut was a common ingredient. Lady Lamington’s guests then asked for the recipe.

A further alternative claim is that Lord Lamington’s cook, presumably Galland, accidentally dropped a block of sponge cake into a dish of chocolate. It was later discovered that desiccated coconut, sprinkled over the top, made the cakes more appealing.

Ironically, Lord Lamington was believed to have hated the dessert cakes that had been named in his honour, referring to them as “those bloody poofy woolly biscuits”